The Muslim-Jewish Advisory Council brings together recognized business, political, and religious leaders in the American Jewish and American Muslim communities to advocate jointly for issues of common concern. Stanley Bergman, Chairman of the Board and CEO of Henry Schein, Inc., and Farooq Kathwari, President and CEO of Ethan Allen, co-chair the national Council. The American Jewish Committee (AJC) and the Islamic Society of North America (ISNA) are its co-conveners.

The Council has two policy objectives: to combat the rise in hate crimes, and to promote the positive image of Muslim and Jewish citizens of the United States.

AJC has partnered with other organizations, in addition to ISNA, to form regional Muslim-Jewish councils in

The planned expansion of the Council to localities around the country comes amidst a marked rise in incidents of hate speech and hate crimes, notably the neo-Nazi, white supremacist rally in Charlottesville, Virginia; the bombing of a Minneapolis mosque, and threats to mosques and synagogues. Each regional Muslim-Jewish Advisory Council brings together business, professional, civil society, and religious leaders from the two communities. 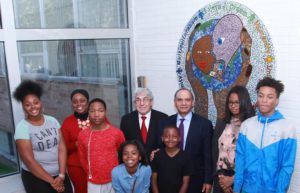